Review: After seventeen years, Ewan MacGregor and Hayden Christensen have returned to the roles they last played in Star Wars Episode III: Revenge of the Sith. Part of Lucasfilm’s expansive line-up of Disney+ original series, Obi-Wan Kenobi had its global launch at Star Wars Celebration where I was amongst hundreds of adoring fans who got to witness the first two episodes of the limited series. By the time you read this, Obi-Wan Kenobi will have already premiered on Disney+, but I can tell you from firsthand experience that seeing it on a big screen demonstrated just how cinematic these small-screen series really are. With a budget that rivals the Star Wars feature films, Obi-Wan Kenobi is an absolutely perfect blend of the prequels and the original trilogy with the right dose of nostalgia. In short, this is the best Star Wars production since George Lucas left the franchise and, for me, eclipses the sequel trilogy entirely.

Having watched the first two episodes back to back in an arena with hundreds of adoring Star Wars fans, the adrenaline is still pumping through me. The audience applauded throughout the episodes, especially during the countless references and callbacks to not only the feature films but the animated series as well. There were also fans who were audibly in tears as they saw multiple moments they did not expect to see thanks to the trailers which spoiled virtually nothing that is in store in the first two episodes. Obi-Wan Kenobi has successfully taken the best elements of the prequels and delivered them through the lens of a filmmaker who does not strive to emulate George Lucas’ visual style and yet this series feels more connected to Lucas than anything J.J. Abrams, Rian Johnson, or Jon Favreau have done.

Obi-Wan Kenobi opens up with a scene set during the execution of Order 66, showing multiple Jedi fall on Coruscant as clone troopers enact Palpatine’s master plan. It is visceral and brutal and a hell of a way to open this story. We then fast forward a decade to Obi-Wan Kenobi’s hermitic existence on Tatooine. Working on a line at a factory, Obi-Wan watches Luke Skywalker from afar while having nightmares of Anakin’s fall to the Dark Side. At the same time, Vader’s henchmen, the Inquisitors, arrive in search of lingering Jedi. Led by the Grand Inquisitor (Rupert Friend), we meet Fifth Brother (Sung Kang) and Reva, known as Third Sister (Moses Ingram). Reva is desperate to find Kenobi but is shunned by her brethren who believe Kenobi to be gone. Reva has a single-minded focus on Kenobi and refuses to give up.

Now, we are going to get into some mild spoiler territory here, so last warning if you don’t want to know any specifics. If so, skip ahead to the next paragraph. Still with me? Here we go. As many rumors have suggested, Obi-Wan Kenobi is called into action to search for young Princess Leia who is kidnapped from Alderaan. After a decade of hiding his powers, Obi-Wan is reluctant to take on the mission and leave Luke unprotected, but Bail Organa (Jimmy Smits reprising his role from the prequels) insists. Obi-Wan then heads out and that is where things get intense. Over the second episode, Obi-Wan gets into a cat and mouse chase with a series of bounty hunters as well as the Inquisitors. Despite not igniting his lightsaber once, Obi-Wan does begin to regain confidence in his Force abilities and learns the devastating truth about Anakin Skywalker’s fate. It is a powerful sequence with a final scene that is going to leave fans howling for more.

Seeing Ewan MacGregor back as Obi-Wan filled me with joy, like revisiting an old friend. Seventeen years older, MacGregor moves and acts more like Alec Guinness than ever. No longer the idealistic Jedi he once was, MacGregor imbues Ben Kenobi with an edge we have not seen before. He still has the wisdom and wisecracks he always has, but he is jaded. A moment where he calls out for Qui-Gon Jinn was heartbreaking as was his final scene of the second episode. While we only see Hayden Christensen for a moment in these first episodes, his appearance drew massive applause and is a haunting moment to behold. There are also wonderful turns in these episodes from Kumail Nanjiani, Flea of the Red Hot Chili Peppers, Jimmy Smits, Joel Edgerton, Benny Safdie, and Simone Kessell. The real scene-stealers here are Moses Ingram as Reva who is the coolest villain we have seen in a while and far more formidable than I expected her to be as well as the young actress playing Leia. It is always tricky casting children in anything, but she is going to easily be a fan favorite.

The first two hours of Obi-Wan Kenobi are stunningly realized using the same Stagecraft technology used on The Mandalorian and The Book of Boba Fett. There are a couple of moments in the first episode where the green screen technology was a bit obvious, but for the most part, the series looks as accomplished as any of the big-screen Star Wars movies. The score by Natalie Holt with a new theme for Obi-Wan from John Williams himself is stirring and emotional and just plain wonderful. With credits to screenwriter Joby Harrold, Stuart Beattie, Hossein Amini, and Andrew Stanton, Obi-Wan Kenobi is written without the pulpy dialogue we often associate with Star Wars projects. Yes, there are some funny moments and some silly moments, but overall this is a very dark Star Wars story that still manages to have moments of brightness that will make you cheer and others that will have you on the edge of your seat.

Deborah Chow directs some truly spectacular moments in these early episodes that will undoubtedly go down in Star Wars history. From brilliant landscape shots of Tatooine and Alderaan to some hand-held action moments that are unlike much of what we have seen in this franchise before, Chow brings a realism to a lot of this show that changes the way you look at this galaxy far, far away. Obi-Wan Kenobi is just the right blend of nostalgia and homage told through a truly original story that captures the two eras of George Lucas’ Star Wars trilogies and combines them in a way we have never seen before. This is the Star Wars story we have all been hoping for since Disney bought Lucasfilm and they have finally delivered. Obi-Wan Kenobi is an exhilarating and emotional blockbuster that will make every single Star Wars fan very, very happy.

Obi-Wan Kenobi premieres on May 27th on Disney+. 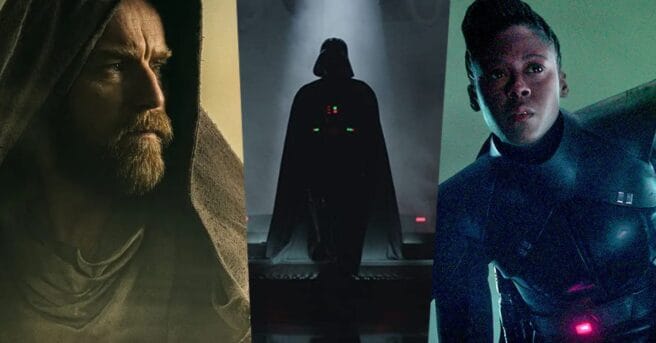