THIS is the terrifying moment a passenger jet pilot filmed a near-miss with a ballistic missile that was fired from a Chinese submarine.

The footage, shot from what appears to be the cockpit, showed the warhead streaking past the packed Cathay Pacific flight.

According to Allegiant Air pilot John Carter, the Boeing 777 was flying over the South China Sea when aircrew received a call from air traffic control ordering them to “turn left 90 degrees immediately!”

The plane diverted after the missile, believed to be a LJ-3 launched from a type 094 nuclear Chinese sub, towered into the sky.

Experts believe the clip, which was posted on Twitter, to be legitimate.

The video shows the missile soaring above the clouds moment after ripping up through the ocean and disappearing into the sky. 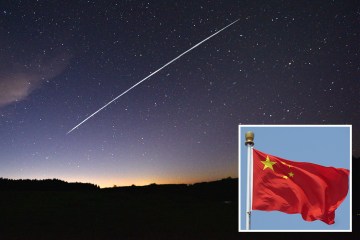 No Notices to Airmen (NOTAM) were issued to warn aircraft about a launch, suggesting the test was a secret run.

The clip appeared online on May 24, but the actual date and location of the incident remain unknown.

Tensions are already high in the region thanks to belligerent moves by Beijing in the South China Sea.

The Asian powerhouse announced plans to carrying out war game drills between May 19 and May 23 – overlapping with US President Joe Biden‘s visit to the region.

It also later announced proposals for a fresh round of war gaming near Hainan scheduled for this week.

Last week, Beijing admitted to carrying out a military exercise around Taiwan as a “solemn warning” against its “collusion” with the US.

On May 7, North Korea tested a submarine-launched ballistic missile test.

It comes as last week, America’s most senior general issued a stark warning that the world faced an increased risk of “global war” amid rising threats from Russia and China.

General Mark Milley, the chairman of the Joint Chiefs of Staff, made the grim prediction as the spectre of nuclear conflict continues to hang over the brutal war raging in Ukraine.

He was speaking to cadets graduating from prestigious US Military Academy West Point as he warned about the risk of a global clash and new technologies like robot tanks.

Gen. Milley said: “The world you are being commissioned into has the potential for a significant international conflict between great powers. And that potential is increasing, not decreasing.”

“And right now, at this very moment, a fundamental change is happening in the very character of war.

“We are facing right now two global powers, China and Russia, each with significant military capabilities, and both who fully intend to change the current rules based order.”

Drawing up his vision of what war may look like in the coming years, he envisioned a grim conflict that would be just as a dramatic shift from “sailing to steam ships”.

He said that artificial intelligence (AI) being used in war is the “most profound change ever in human history”.

“You’ll be fighting with robotic tanks and ships and airplanes,” the general predicted in his speech.

“We’ve witnessed a revolution in lethality and precision munitions.

“What was once the exclusive province of the United States military is now available to most nation states with the money will to acquire them.”

He warned: “Whatever overmatch we the United States enjoyed militarily for the last 70 years is closing quickly.

“And the United States will be, in fact, we already are challenged in every domain of warfare in space and cyber, maritime air and, of course, land.”

Communist leader Xi Jinping’s nation is currently predicted to overtake the US economy by 2030.