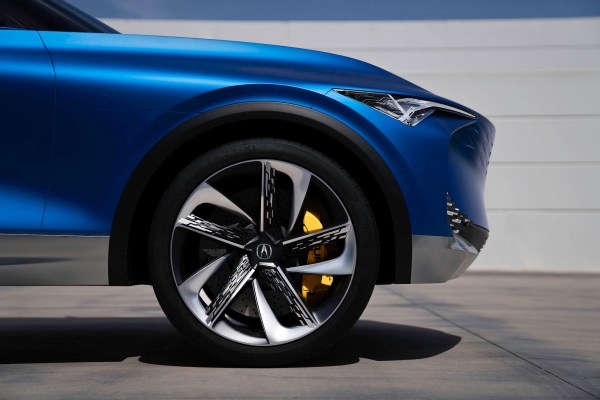 Acura is preparing for the EV future in the same way most other automakers are planning out their transition to electric car manufacturers, with an SUV.

The awkwardly named Acura Precision EV Concept will make its debut at the annual Monterey Car Week festivities with a nod towards the boating and F1 world. It’s an odd combination, but the automaker seems to have pulled it off.

Acura and its parent company Honda haven’t embraced the coming EV evolution as quickly as other brands, especially in the United States. But it’s a marathon, not a sprint to replace gas-powered vehicles. While it’s only a concept, the design language of the Acura Precision EV Concept does give us a good glimpse of what to expect in 2024 when Acura begins building its production electric SUV.

The concept itself is a sleek SUV with a long hood line that dwarfs what we see on the automaker’s current MDX and RDX vehicles. As with most vehicles that’ll never be sold, the concept has an impressive front fascia light signature (called Particle Glitch) that illuminates the automaker’s Diamond Pentagon grille.

Without sharing range or battery capacity details, the Acura Precision EV Concept does slightly resemble the Honda Prologue electric EV. Both vehicles are scheduled to appear in 2024. The Prologue will be built using GM’s Ultium EV platform and its extremely likely that the Acura will also roll on General Motors batteries.

That said, Acura hasn’t disclosed the range or battery capacity of the concept or the upcoming production vehicle.

A curved infotainment screen with a driver-focused tilt sits alongside a yoke steering control. Acura says this along with the low-slung sitting position are a nod to F1 racing. Tesla has famously put its own yoke controls in its Model S and it’s been polarizing to say the least. Acura, while a performance brand will likely replace the concept control with a more traditional steering wheel.

For those moments when driving isn’t ideal (Traffic), Acura’s concept will drive itself and transform the interior of a race-inspired cockpit into what it calls a Spiritual Lounge. Red ambient lighting will make way for a soothing and warming interior with “soothing scents” and an “under water” projected animation to help relax the passengers.

While the more outlandish portions of the vehicle will not be included in Acura’s electric SUV coming in 2024, the overall design of the concept will be the blueprint of what we can expect from the performance brand.

Acura might be a little late to the EV game, but as long as what it is bringing continues to focus on the brand’s performance lineage, its boat (and race)-inspired SUV could be exactly what fans of the brand are looking for.

September 29, 2022
Tokenization is key to linking TradFi to the blockchain • TechCrunch