VLADIMIR Putin has appeared to retch and splutter throughout his meeting as he met with a close ally and defence aide.

The Russian president’s face appeared bloated as he gripped the table in front of him during talks with Sergey Chemezov, head of state-owned defence giant Rostec.

Putin, 69, sat opposite Chemezov, whom he has known since they were both in the KGB in the 1980s, staring ahead with dull eyes.

He seemed to retch several times and struggle to speak throughout the clip released by Russian state TV.

It is the latest appearance by Putin to spark speculation about his health since the start of the war in Ukraine.

Kremlin insiders have claimed that he may have cancer, which could explain his recent bloated appearance and erratic behaviour. 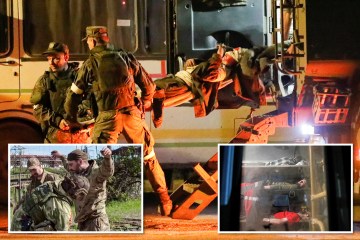 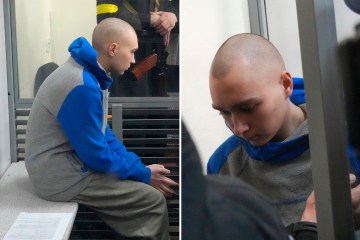 Yesterday, it was reported that Putin had emergency surgery to drain fluid from his abdomen.

The Russian president was seen hosting a virtual meeting of the country’s security council on Friday, sparking a number of comments about his bizarre appearance.

An anti-Putin channel on the messaging app General SVR, which is reportedly run by a Kremlin insider, shared the allegations about Russia’s leader on Tuesday.

It insisted in the post that “Vladimir Putin did not hold this meeting in real-time”.

The post went on: “The introduction was pre-recorded and the closed part was played using computer graphics and Deepfake technology to create the illusion of Putin’s presence.”

Explaining the reason for Putin’s absence on Friday, it added: “On the night of Thursday, May 12 to Friday, May 13, Putin underwent a surgical procedure to remove fluid from his abdomen.

It isn’t known whether this abdomen-draining procedure was part of cancer treatment.

The abdomen naturally contains peritoneal fluid, but it can build up excessively as a result of certain conditions.

These include cancer, cirrhosis, infection, or inflammation.

While last week, it was reported that Putin is “very ill with blood cancer,” according to a Russian oligarch.

The business leader who was secretly caught in an audio recording slammed the Russian president, adding:

All you need to know about Russia’s invasion of Ukraine

Everything you need to know about Russia’s invasion of Ukraine…

“The problem is with his head… One crazy guy can turn the world upside down.”

In his TV appearance on Tuesday, Putin appeared fidgety and twitchy, slouching over as he gripped the arm of his chair.

It follows claims that Putin’s chaotic invasion of Ukraine could be due to his receiving chemotherapy.

An oncologist has alleged that Putin may be suffering from “chemo brain”, a cancer-related cognitive impairment brought on by treatment.

Individuals suffering from chemo brain can make “crazy” decisions without thinking them through.

Although the Kremlin insists that Putin is perfectly healthy, many have claimed that Russia’s leader has looked increasingly unwell in recent months.

In today’s meeting with Chemezov, the Rostec boss announced the upgrading of Putin’s new fighter jet.

It will include a new Kuznetsov NK-32 engine, the Russian defence chief bragged.

“The heavy upgrade of the Tu-160M missile-carrying bomber with the NK-32 engine has been completed,” he said. “We have actually created a new aircraft.”

Russia’s upgraded Tu-160M will only retain the external appearance of the original Tu-160.

“Both the engine and the onboard equipment are new and all of the assemblies have been replaced,” Chemezov added.

He said that serial production will begin in 2027 and that so far, a prototype version has been created.

In March, just weeks after the Russian invasion of Ukraine, Chemezov’s £120m superyacht ‘Valerie’ was seized in Spain as part of sanctions against Putin’s regime and his cronies.

The luxury vessel, which was used by Ben Affleck and Jennifer Lopez last summer for a romantic getaway, has been temporarily seized in Barcelona.

Spanish Prime Minister Pedro Sanchez said on La Sexta television: “Today we seized – the technical term is provisionally immobilised – a yacht belonging to one of the principal oligarchs.

“We are talking about a yacht that we estimate is worth $140 million.”