Review: When the first teaser for Angelyne debuted in early 2020, Emmy Rossum’s eye-opening transformation into the Los Angeles billboard icon was all anyone was talking about. Billed as one of Peacock’s tentpole releases, it has now been two full years since that first glimpse. Now, the limited series is finally premiering and everyone gets the chance to see if Emmy Rossum’s performance is more than a pair of prosthetic breasts and skimpy outfits. Thankfully, Angelyne is a bizarrely engrossing look at the physical embodiment of the American Dream. Wrapped in a rags-to-riches story with a wicked sense of humor along with a message about self-empowerment, Angelyne is an enjoyable biography of someone most of those outside of California know little to nothing about.

Angelyne features a stunning performance from Emmy Rossum in which she completely transforms herself into the title character, something you will recognize right away have you seen any of the copious YouTube clips of the buxom blonde. From her cleavage and leg-baring outfits to her squeaky voice, Angelyne is a living Barbie doll, something she says she aspires to be in the first episode. But, Angelyne is not just some air-headed bimbo. Series creator Nancy Oliver makes very sure to position this series as a tribute to just how cunning and crafty Angelyne was in achieving her dream of becoming famous for being Angelyne rather than because of any talents or skills. In an era before social media, what Angelyne accomplished was without comparison and she did so because of her intelligence and drive rather than in spite of it.

Told in a faux-documentary style, Angelyne features contemporaneous interviews with the characters in the story retelling their lives and how they intersected with Angelyne’s during her rise to fame in the early 1980s. Over the five-episode series, Angelyne presents the events from various perspectives which leads to some meta moments that involve changes in sets, costumes, and events to match the perspective of the person narrating the scene. In one particular moment, Angelyne herself proclaims the moment is not accurate and changes things as they occur. It is an intriguing approach to this story as the real Angelyne herself was the architect of her own success, building her persona from scratch and hiding her true identity until a reporter discovered the truth in 2017. Not everyone appreciated Angelyne’s singular vision while others adored her or were infatuated by her. This series shows them in equal measure.

From Angelyne’s fan club manager Rick Krause (Hamish Linklater) to her manager who paid for her billboards, Harold Wallach (Martin Freeman), this series has a solid supporting cast of recognizable and talented actors who all appear subtle in the shadow of Emmy Rossum’s performance. Rossum, who plays Angelyne through all the decades of the story, sometimes with aging prosthetics and others without, makes the image of Angelyne more than just a facade but does show how the real person maintains her persona to this day despite rumors, misogyny, adversity, and the male gaze. There are poignant moments throughout the series where I questioned whether Angelyne was lucky or a genius and the answer likely falls somewhere in the middle.

Directed by Lucy Tcherniak and Matt Spicer and written by Allison Miller, Any Sciara, and Brendan Kelly, Angelyne benefits from Emmy Rossum serving as producer alongside her husband, Sam Esmail (Mr. Robot), Angelyne plays with the concept of reality and truth, often blurring the line between serving as a biopic versus a fantasy tale. As a slice of California history as well as an ode to the excess of the 1980s, Angelyne is a wonderfully funny and heartwarming story about how things used to be. There are elements of the story that become sadder as the characters age and Angelyne herself struggles to stay relevant, but when her past is revealed to the world, the truth becomes the most shocking and tragic element of the entire saga.

Angelyne is a very weird story and one that I am glad got told as it offers us a story that is so strange that it has to be true. It also gives us great performances from Hamish Linklater, Martin Freeman, Lukas Gage, and Alex Karpovsky as well as a transformative portrayal from Emmy Rossum. By the end of Angelyne, I was not sure what to make of the show but it will certainly divide people who may be wondering why the hell they are even watching it. With the entire five-episode run premiering at once, audiences can binge this funny, weird, and touching story that turns an iconic pin-up into an icon. This is a very entertaining tale that has more depth than I ever expected.

Angelyne premieres on May 19th on Peacock. 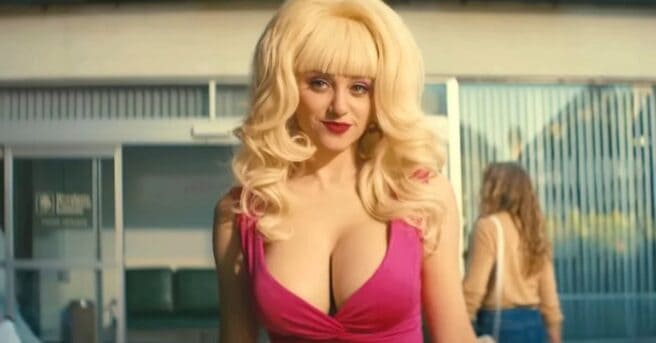