In recent years, YouTube has been working to transform its platform into more of a shopping destination with product launches like shoppable ads or more recently, the ability to shop directly from livestreams hosted by creators. Now, it’s furthering that investment with new features for live shopping experiences. At yesterday’s YouTube Brandcast event, where the company pitched itself to advertisers as a better place for their TV ad dollars, YouTube teased upcoming features that it claimed would make it easier for viewers to discover and buy from brands.

The company touted its forthcoming tools as offering advertisers a better way to engage viewers and make connections with their audience.

One new feature, explained YouTube, will allow two creators to go live at the same time to cohost a single live shopping stream. This could effectively double the draw for the event, as each creator would bring their own fanbase to the stream.

This feature arrives shortly after YouTube in March announced a pilot program called “Go Live Together,” a new mobile collaborative streaming feature that would enable creators to invite guests to their livestream with a link before going live together. This trial suggested YouTube had its eye on developing tools to better power joint livestreams — just as it’s now planning to introduce with its upcoming two-person live shopping streams. The addition could also make YouTube more competitive with Instagram which launched the ability for creators to go live with up to three people last year.

In addition to leveraging creators to build an audience for a live shopping event, YouTube’s shopping livestreams platform also offers other tools specifically designed to drive sales. The brand-integrated shopping experience actually allows viewers to shop the products shown in the video by tapping on a built-in “view products” button which then brings up a list of items featured by the creators.

The company says its new two-person live shopping feature will roll out sometime later this year.

Another upcoming option announced at Brandcast is something YouTube calls “live redirects.”

In this case, creators will be able to start a shopping livestream on their channel, then redirect their audience over to a brand’s channel for fans to keep watching. This allows brands to tap into the power of the creator’s platform and reach their fanbase, but then gives the brands themselves access to that audience — and the key metrics and analytics associated with their live event — directly on their own YouTube channel. This will also roll out sometime this year, says YouTube, but didn’t provide a timeframe.

YouTube’s announcements follow the broader growth of the live e-commerce market in the U.S. — a trend inspired by the livestream shopping activity surging in China, where streamers can pull in billions of dollars in a matter of hours. Today, a number of startups have also entered this space, including TalkShopLive, PopShop Live, NTWRK, Whatnot, ShopShops, Supergreat, and others. Klarna even added virtual shopping capabilities to connect its buy-now, pay-later customers with live product demos from retail partners.

Retailers, too, are getting in on the action. Nordstrom launched a live events platform, while Forever 21 and Macy’s are among those that added live shopping to their apps.

Over the past year or so, we’ve seen Walmart pilot testing TikTok’s first livestreamed shopping experience; Facebook’s live shopping boosting sales for brands like Petco, Benefit, Samsung, Anne Klein, and others; and Instagram hosting live shopping events to cater to holiday crowds. Twitter even began to test livestream shopping, also with Walmart’s help on its pilot run — but it’s unclear where such initiatives will land if the Elon Musk buyout comes to pass.

While YouTube is certainly one of the largest creator platforms for video, there is some indication that it needs to catch up to its big tech rivals in livestream shopping, however. An eMarketer study from Jan. 2022 found that only 14.4% of survey respondents said YouTube’s platform drove them to purchase during a livestream event compared with 15.8% for TikTok, 45.8% for Instagram, and 57.8% for Facebook. 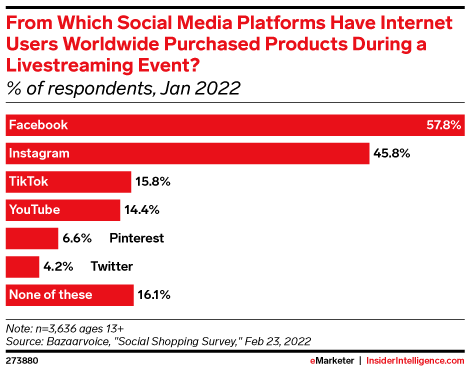 YouTube’s new livestream features — and particularly the one that pushes a creator’s fanbase to a brand’s channel — could make its solution more compelling.

“People come to YouTube every day to make decisions about what to buy, and 87% of viewers say that when they’re shopping or browsing on YouTube, they feel like they can make a faster decision about what to purchase because of all the information that we have in videos,” said YouTube CEO Susan Wojcicki, speaking to the audience at the Brandcast live event last night. “We have so much shopping activity that is already happening on YouTube, so we are making it even easier for viewers to discover and to buy,” she said.