RUSSIA’S terrifying Satan-2 nuke can demolish “half of the US coast”, an ally of Vladimir Putin has bragged to kids in a chilling warning to the West.

The world-ending RS-28 Sarmat missile can blast targets at almost 16,000mph, carry 15 warheads, and has the potential to obliterate an area the size of Texas in a single strike.

In the latest of a series of threats to unleash atomic weapons on the West, Dmitry Rogozin, head of Russian space agency Roscosmos, has boasted to schoolchildren the missile will “take up combat duty” this year.

Rogozin crowed to the youngsters: “Here you see the test launches of our missiles. The smallest are shown on Red Square parades.

“The largest will not fit on Red Square, as they are too big. 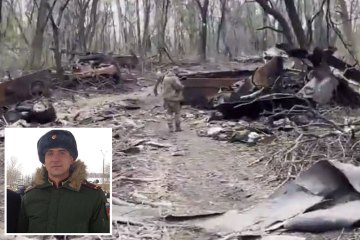 “Such a missile [Sarmat] can demolish half of the coast of some large continent, which we may not like due to its aggressive policy.”

Rogozin – who wore the space agency’s uniform – made clear that “unstoppable” Satan-2 would “take up combat duty” this autumn.

He added: “We are also producing Iskanders and hypersonic Kinzhals in our factories.”

Some experts see the threats as masking a poor showing by the Kremlin’s armed forces in Ukraine as Putin’s invasion falters in the face of staunch resistance.

A Kremlin mouthpiece threatened to use Moscow’s new Zirzon weapon system to plunge the country into permanent darkness by wiping out 50 or 60 power stations.

In an outburst on Rossiya 1 channel, controversial Moscow-born Israeli pundit Yaakov Kedmi claimed that the use of the Satan-2 would be “too good” for Britain, and instead advocated a submarine missile salvo with Zircon missiles.

Zhuravlyov threatened to nuke Britain with its Satan-2 hypersonic missile in 200 seconds and obliterate Finland in just ten.

Close Putin ally Dmitry Rogozin, head of the Roscosmos, the Russian Space Agency, has also warned that NATO countries can be destroyed within half an hour in a nuclear attack.

And Putin has warned he will use nuclear weapons against the West if anyone interferes in Ukraine.

The Russian tyrant said the response to counterstrikes will be “lightning fast.”

Russia successfully launched the missile earlier this month with Putin warning the test was “food for thought for those who try to threaten Russia“.

A video showed the killer missile being launched from an underground silo, triggering an enormous fireball.

It travelled almost the entire length of Russia – almost 3,600 miles – in around 15 minutes and landed at Kura Missile Test Range on the Kamchatka Peninsula.

The bombs are 1,000 times more powerful than those dropped by the US on Hiroshima and Nagasaki in Japan during World War Two.