A TRAUMATISED mother told yesterday how she found her son beheaded by Russian rockets.

Yana Kovaliova wept as she spoke of the moment she found 18-year-old Mark decapitated in the street next to his dying girlfriend.

And the heartbroken mum vowed to see his killers face justice at a war crimes trial.

She told The Sun: “I fell to my knees and screamed when I found him like that — I screamed, ‘My son, my son, my son!

“Shrapnel had taken off his head as he bent down trying to shield his girlfriend from the blasts.

“I recognised the hooded top he was wearing and saw he had been reaching for his phone in the pocket when he was hit. 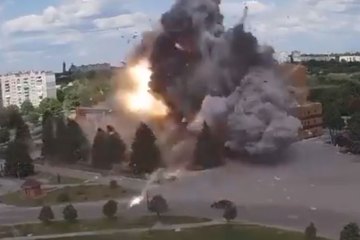 “The shock of seeing that struck me dumb for 24 hours and I couldn’t eat for three days or stop crying.”

The attack took place in the blitzed eastern city of Donetsk which President Volodymyr Zelensky this week described as having been reduced to “hell”.

Yana, who has now fled to southern Ukraine along with tens of thousands scarred by Vladimir Putin’s reign of terror, said: “No Ukrainian military were in the village when they launched rocket after rocket — bang, bang, bang, bang — and the last one hit my son.

“Putin and the Russians are terrorists and this was a war crime — and I want them all to face justice.”

Mark — Yana’s only son — was walking to see his mum with his student teacher girlfriend Katarina Sudaremko, also 18, when they were caught in the rocket barrage.

The tearful mum added: “My son was such a positive, happy young man who had studied hard and was looking forward to a career working in the railways.

“He was coming over to see us from his grandmother’s house with Katarina — a pretty girl who we were very fond of.

“And now both their lives have been wiped out for nothing. The pain is just too much.”

Yana’s husband Anatoly — who is Mark’s stepfather — told how Putin’s barbaric brand of terror came to the once-tranquil urban village of Verkhniotoretske, near Donetsk.

Nurse Yana was in her kitchen and builder Anatoly was close by when an ear-splitting explosion blew in their windows, sending them crashing to the floor at 12.10pm on March 15.

Anatoly told The Sun: “The first rocket landed in our next-door neighbour’s garden and we both dived to floor.

“Then there was another enormous bang and another, then another. I realised we were under multiple rocket attack.

“The impacts seemed to stretch out in a line along the street and we were told the last explosion from the first salvo killed Mark and Katarina.

“I waited for a lull then ran out with Yana trying to find them then a neighbour shouted, ‘I think Mark’s been hit’.

“We ran to the spot and there was screams and chaos and blood everywhere, and then I saw Mark lying crouched in a ball as though he had been trying to shield Katarina.

Pausing to light a cigarette with shaking hands, Anatoly continued: “I lifted the hood of his sweatshirt top and found nothing there.

“I still can’t bear to describe what I saw that day but it will stay with me forever.

“Then I heard Yana’s awful screams followed by another sound — the sound of more Russian rockets exploding around us.

“We took cover then I ran back and found Katarina was still alive but terribly wounded.

“I knew she was dying and stayed with her until she took her last breath, then I closed her eyes.”

The traumatised couple escaped the second barrage — believed to be another 24 rockets fired from Russian Grad multiple rocket launch vehicles miles away.

Barrages became so intense that Yana and Anatoly were unable to take Mark and Katarina’s bodies to a hospital and had to leave them in their garden.

The grieving couple then cowered in a basement as the house above them was demolished by more blasts.

It was three days before they were able to move the bodies.

They were evacuated to Kramatorsk from where they arranged their funerals before fleeing south.

Their story bears testament to President Zelensky’s claim earlier this week that Russian forces were systematically decimating the Donbas region.

He said: “It is hell there — and that is not an exaggeration. Donbas is completely destroyed.”

VLADIMIR Putin is losing his grip on Russia as he has to break up meetings to receive medical care, claims a former British spy.

The dictator is constantly surrounded by a team of doctors and needs round-the-clock monitoring, claims ex-MI6 man Christopher Steele.

He said: “Meetings of the security council that are shown to supposedly last for a whole hour are actually broken up into several sections… he goes out and receives some kind of medical treatment between those sections.

“And so, clearly, he is seriously ill, I mean how terminal or incurable it is is not clear… we can’t be entirely sure.”

There have been claims the Russian leader has cancer or Parkinson’s after footage emerged of his hand shaking uncontrollably.